TESTIMONY My boyfriend left me because of my Halloween costume

Halloween is the only time of year when anyone can dress however they want without fear of being judged. Stepping into the shoes of one (or another) for an evening is particularly pleasant.

However, while celebrating this seasonal holiday with her friends, Pia Blossom was no doubt shocked to learn that her then-boyfriend called her Halloween costume particularly inappropriate.

Left for a costume

Star of social networks and in particular of TikTok, Pia, who has more than 240,000 subscribers on her account @piablossom_x, explained how she had to face a sudden breakup for a reason, in her eyes, derisory. In her video, the young woman explained “It’s almost Halloween, so I thought I was going to tell you about the time I got dumped for a costume”. Pia had chosen to wear a “Dead Playboy Bunny” outfit, a black leotard, tights, a pair of heels and bunny ears, associated with a bow tie and fake blood.

“As you can see, I was a dead Playboy bunny and I only wore tights. They are quite dark in this photo. It’s more obvious on another where I appear from behind, but if I post it here, TikTok will remove it. “My brand new boyfriend was looking for an invitation for this evening but I was going out with two friends who did not bring their partners” she continued. Ignoring her boyfriend’s hints, she is amazed at his remark when she posts her outfit on Instagram. “Before he went out, he texted me saying, ‘Are you wearing that outside? I can see your ass! “”.

Her boyfriend insists that Pia’s outfit is, in his opinion, inappropriate. “I was at a friend’s house ready to go at the time and he was like, ‘Can you borrow some leggings from him or something? And wear leggings instead of tights! “”. Reading his messages, Pia gets angry and replies “And ruin my costume? Nope ! “. Recounting the rest of the evening, Pia indicated that her boyfriend was to pick her up at the end of the evening, insisting heavily on this point. “I’m in the club and it’s Halloween,” she said, adding, “Everyone is dressed up and I meet this guy who’s dressed as a giant egg.” Although the man is “really drunk”, Pia tells him that she loves his costume. He then offered her a trade.

“He said to me, ‘I like yours, do you want to swap? » and I answered « Yes! » she indicated. “I put the egg costume on top and took my leotard out from underneath. I thought, mistakenly, that my boyfriend would like it because I no longer had visible breasts,” she noted. When her boyfriend discovers this in his Instagram stories, he “tries to call me a million times”. When she calls him back, she does not expect this remark. “I thought he would tell me he couldn’t pick me up or something. But instead he said, “Whose suit is it?! “”. Pia replies that she thought the exchange would satisfy him since you can no longer see “my breasts or my buttocks, I am an egg”. However, his companion gets annoyed “Which man did you sleep with so that he gave you this costume? he asks her. Pia explains the exchange to him then hangs up and turns off her phone. “I continued my evening with my friends and I never saw him again,” she said. “He then said we broke up because I slept with someone else for an egg costume,” she concluded. 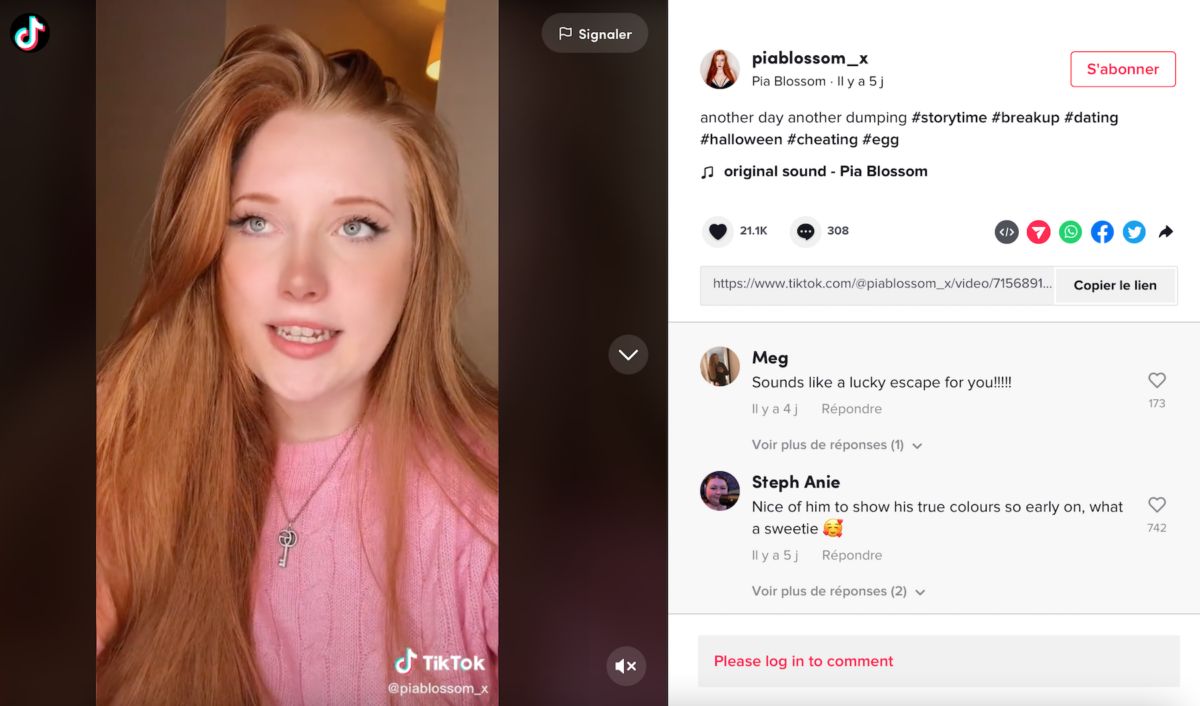