She does not “miss” him and she has not “lost” him. For Chloé Valentine Toscano, the amputation of her left arm was the “best decision” of her life. A choice that she describes as strategic and essential.

To explain her choice, which may seem extreme and strange to some, Chloé returned at length to her journey and her decision in the Huffington Post newspaper.

The best decision of his life

“‘The best decision I’ve ever made’ is what I tell myself when I ingeniously use a spatula to keep my shower curtain closed or when I buy a slice of pizza,” said Chloe, adding ” Now I look at the short part of my left arm that remains after I removed most of it and I say that too”. A decision that the young woman made a year ago and that she does not regret.

Chloe had spent six years living with an arm that no longer had any motor function from the elbow to the fingers, after being injured in a Vespa accident. “Imagine, you are aware of something but you have absolutely no control over what it is doing,” she commented. Chloe then inquires about the amputation. “I had no guarantee that life would be any better as an amputee than with a paralyzed arm,” she noted. However, Chloe feels that this decision is one of sanity.

In December 2021, the young woman therefore goes on the operating table. Now, she only has 17 cm left on her left arm, but, she says, “it serves me much more than the full version”. Two months after her amputation, Chloe is already able to use it to hold objects, something she was unable to do with her paralyzed arm. “I jam everything I need under my armpit and use my small member to block it,” she explained. A gesture that seems “as natural” to her as if she were using her missing hand.

A disability that has become visible

Going from an invisible handicap to a visible handicap also had a second positive effect for the young woman. “Before, I dreaded asking anyone for help. I looked relatively “normal”” she commented. Chloe was tired of having to justify herself despite her deceptively perfect appearance. “One day, I got stuck, unable to zip the side of my skort while I was in the public restroom,” she recalled. “Without any embarrassment or explanation, I asked for help from the woman who was washing her hands next to me,” she said.

Chloe is certain that the amputation has increased her self-confidence. “As soon as I woke up from surgery, I called a friend and said, ‘I’m beautiful with one arm,'” she recalled. “I look in the mirror and I like what I see,” she continued. However, it was hardly a question of aesthetics but only to see how his handicap could become useful to him. “Disability naturally deprives you of your bodily autonomy. Here, I had something to do to let me choose how I wanted to live my fight” she noted. Throughout the summer, the young woman, proud, appears in a tank top, which does not fail to attract attention.

Explain the benefits of amputation

“The first time someone audibly noted my disability was a teenage girl who walked past me and whispered to her mother, ‘I feel bad for that girl, she’s missing an arm,'” Chloe said. . Far from being discouraged, she seizes this opportunity to open a discussion on disability. “I feel happier now,” I told her. “When I had two arms, I felt trapped by the one who had injured himself and was not working” she recalled. She then reveals her daily life to him, her ease in dressing, cooking and, , to live.

Proud to do things alone

Cheerful, Chloe noted that her situation also had unexpected advantages such as a reduction in the reading of the lines of the hand, or savings by buying her gloves, no more theft of business at the swimming pool since she always cuts the left sleeve, etc “I wouldn’t recommend trying this at home, but last week I used it to hold a mango while I was peeling it. The sleeve of my T-shirt was damaged, but it’s a small price to pay to finally be able to do things on my own again,” she said proudly.

Recently, Chloe’s arm started growing back, “Like a lizard?” I asked my doctor, bordering on excitement at the idea that I could really be part of it, ”she laughed. In reality, it is the bone of his arm which has practically rebuilt itself, a year after the amputation. So that the bone does not come to exceed the skin, Chloé must again have part of her arm cut off. And faced with this new operation, she says “I couldn’t be happier about it! “. 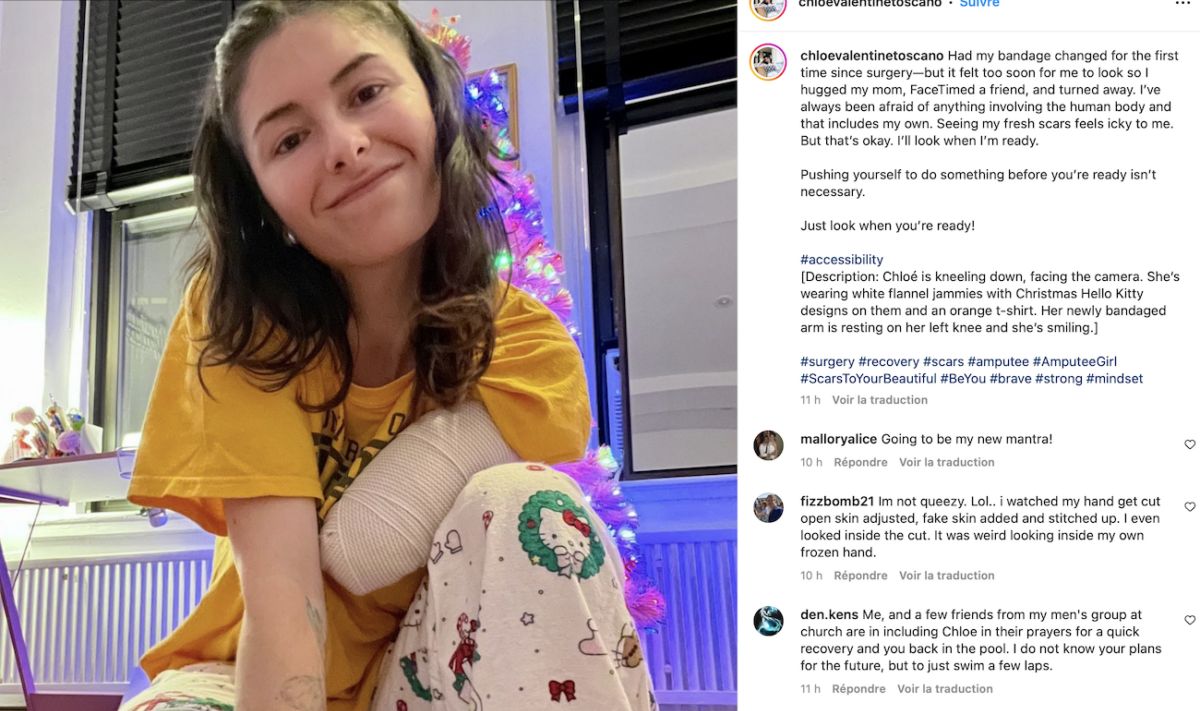