She proposes to her boyfriend and draws criticism

She had just got engaged, they were going to get married, everything was wonderful in the most beautiful of worlds. Like many fiancées, Sukhmin Garcha, delighted with her recent engagement, wanted to share this event with her online community.

Unfortunately for the young woman, by revealing this intimate and intense moment on her TikTok account, it was a wave of hateful comments that came under her video, leaving the new fiancée hurt.

She was delighted with her engagement. The 27-year-old Sukhmin turned the tables by asking partner Shiraz Brar, 27, to marry her last July. Delighted to share this news online, she did not expect so many sexist reactions in return. “I have always been open to making the request,” she explained to the New York Post newspaper. “I was quite nervous about it at first. I wanted to find the right moment to do it,” she revealed. At the right time, she says her boyfriend had “the biggest smile on his face” and that his friends and family were “really supportive and happy” about her decision to undertake the marriage proposal herself.

However, online, it was a different reaction that women in her community had. “I got a lot of negative comments,” she said. “A lot of them were like, ‘I’d rather die’ or ‘She has no self-esteem’, ‘He doesn’t look happy’ and the list goes on,” she continued. Very surprised that a large part of these comments were written by women, Sukhmin continued “It was interesting to see how the men supported the fact that women propose marriage”.

Shake up the codes

Despite this flurry of judgment from strangers, Sukhmin encourages women to get on their knees if they feel ready to move on in their relationship. “I would say just do it! If you’re both in the same level of investment in your relationship, it’s obvious, “she said. Stating that it was not “bad” because it was uncommon in our society, she pointed out “We are the new generation, and we can certainly build a new society where gender roles do not exist”.

As her video went viral, Sukhmin took a moment to explain that the couple had already decided to get engaged, Shiraz planned their proposal several months ago. However, the young woman wanted “just to make a nice gesture” for her future husband who loved this attention. In response to the video, he commented on having the “most amazing woman ever” and advised “Find yourself a strong woman who knows how to break taboos”. Sukhmin concluded, “In our society we always want equality but because of cultural prejudices, there is always resistance. I sincerely believe that we should break those norms and live life to its fullest potential, choosing to spread kindness and love.” 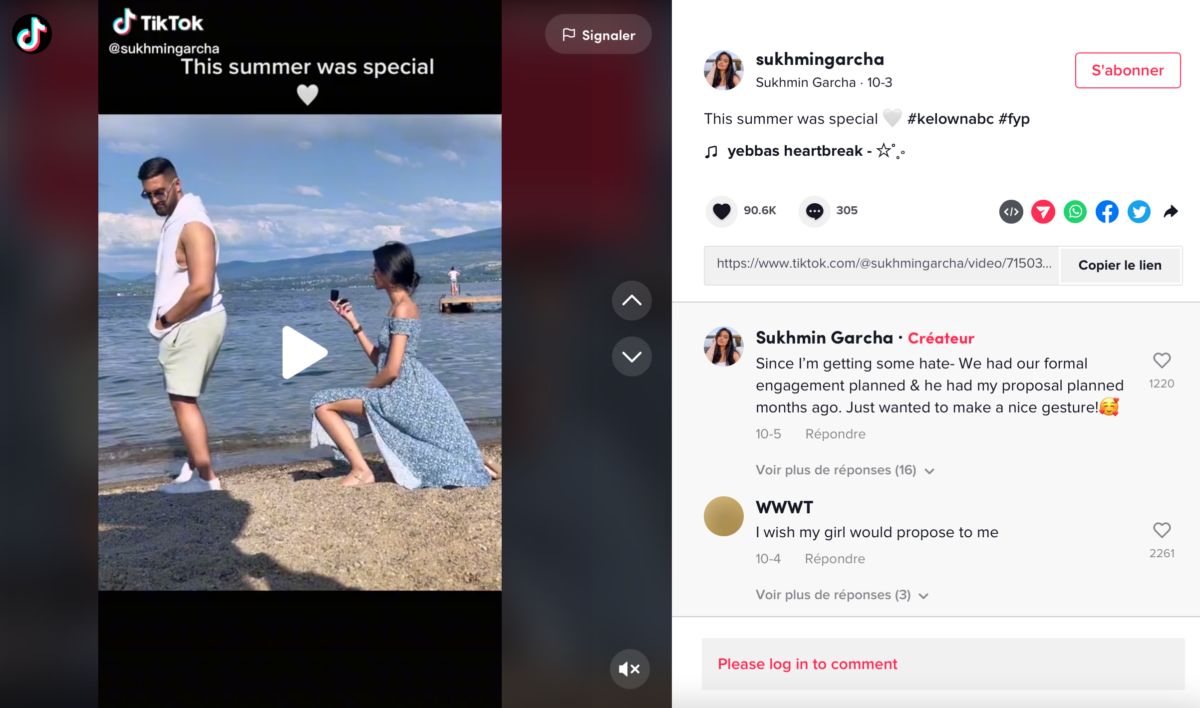