Until last year, Lane, known on TikTok by the handle @laneiscool14, had no idea her story would be turned upside down. In a series of videos posted on the social network, the young woman returned to this incredible story.

Originally from the United States, Lane once received a text from a stranger asking him to take a DNA test. A test whose results have revealed a heavy family secret…

A message that changes everything

“About a year ago now, on January 9, 2021, I received a text message telling me to take a DNA test from Ancestry,” Lane said in his video. “This message changed my life forever,” she added. Thinking it’s a joke, Lane FaceTimes a friend to get her opinion. “She replies, ‘I swear my gut tells me this is real. You should answer”. Following his advice, she resumed contact with the site.

“They didn’t provide me with any kind of evidence. Of course, I called my mother immediately asking her “What the fuck? » Lane continued. After a long conversation, his mother ends up confessing to him that she had an affair with a 25-year-old man. Aged 35 at the time, she was attending university to obtain her degree in education. She then explains to Lane that the man who raised her was not her biological father. “I almost fell off my chair,” she confided.

Lane immediately asks for an ancestry test. Six weeks later, the results confirm that the stranger who contacted him is indeed his biological father. “I’m sending him a message immediately. He lives in California. He is British,” she said. Seeking answers to her many questions, the man tells her that her mother sent her a Christmas card when Lane was two years old, giving her a picture of her daughter and her name. Since then, her father has been trying to find her.

“In 2007 my name came up and he saw a picture of me. He knew right away that I was his daughter,” explained Lane. She also learns that her father had tried to reach her through her mother but that the latter had obstructed him, “threatening” him and ordering him to “leave them alone”. “So what did he do? He has followed me on social media all my life,” she noted. Her father thus sees her going out with her boyfriend, getting married, having children “all from the outside, unable to know me” she slipped.

On TikTok, Lane’s video has been viewed over 10.5 million times. Many users, shocked by his story, were also eager to know more. “He was denied a girl,” wrote one person. “I’m glad you know the truth, but it’s a hell of a way to learn it!” said for a second. “It’s heartbreaking” noted a third, adding “It makes me so sad that he missed so much when he wanted to be involved”.

In a follow-up video, Lane revealed that her biological father called at her workplace once upon a time, hoping to hear her voice. He was also looking for her to cut his hair while trying to make an appointment at the salon where she worked. However, his wife had advised him against it, believing that Lane would immediately understand that he was her father. Lane also added that it was his father’s nephew who, having found himself in a similar situation, had sought to bring them together. Which was not without consequence.

A found father, a lost mother

Indeed, the family secret has put Lane’s relationship with her mother to the point that the young woman has cut her out of her life. “It was one of the hardest things I’ve ever done,” she said. “I never expected it,” she said. As for the relationship she has with her non-biological father, there too, the thing got tougher. If he knows that she is biologically not his daughter, they avoid broaching the subject. “One of my sisters told him immediately, so I don’t know what his reaction was,” Lane explained. “I can only imagine that he was as devastated as me,” she assumed, before concluding, “He’s still my father. I am still his daughter. My children are still his grandchildren. I just feel like I have two dads now, which is a good thing.” 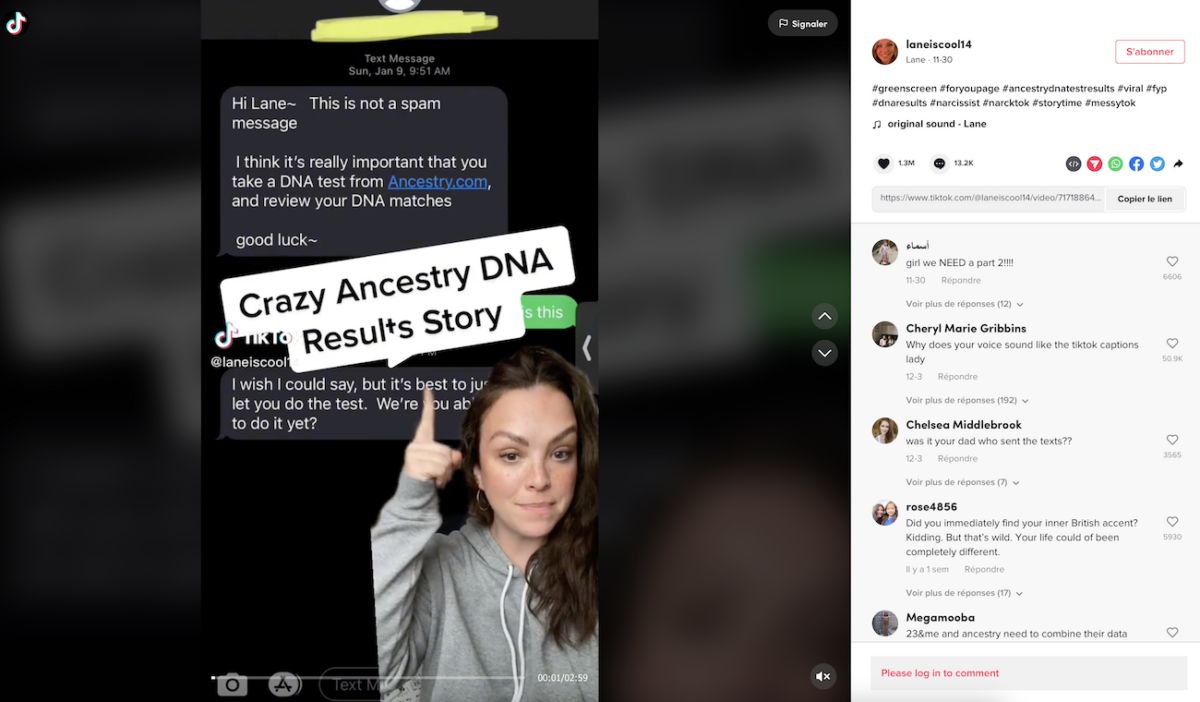