Princess Charlotte: the tender story behind the brooch she wore at the funeral of Elizabeth II

Princess Charlotte wore a brooch for the first time at Queen Elizabeth II’s funeral.
It was a jewel in the shape of a horseshoe, a tribute to the sovereign’s passion for horse riding.
The brooch given by the Queen to her great-granddaughter previously belonged to the Queen Mother.

At just 7 years old, Princess Charlotte attended a sad event on Monday, September 19, the funeral of her great-grandmother, Queen Elizabeth II. During this event organized in Westminster Abbey, she was accompanied by her older brother, Prince George, 9 years old. For his part, Prince Louis was deemed too young to attend such an event.

Throughout the ceremony in tribute to the monarch who died at the age of 96, Kate Middleton remained with her two children. And Princess Charlotte impressed with her elegance and good manners. The little girl who has not stopped giving advice to her big brother, thus made a bow when the coffin of Queen Elizabeth II passed in front of the royal family.

Princess Charlotte wore a brooch in tribute to the Queen

As for her outfit, Princess Charlotte was dressed all in black, unlike her brother George. Just like her mother, the new Princess of Wales, the little girl wore an elegant black Ancar coat and a pretty Jane Taylor London hat. This is also the first time that she wore a hat during an official event with the royal family. Finally, Prince William’s daughter wore a rather special brooch on the left side of her coat. It was a small diamond horseshoe that would have been given by Queen Elizabeth herself to her great-granddaughter. A beautiful tribute since the monarch had a passion for horses.

According to People magazine, the first brooch worn by Princess Charlotte is a particularly precious and ancient jewel. Indeed, it is a brooch that previously belonged to the Queen Mother, the mother of Queen Elizabeth II. The wife of King George VI had also been photographed wearing this magnificent jewel in 1929. The brooch would therefore be around a hundred years old and would have been transmitted by the Queen Mother to her eldest daughter and then to the daughter of Prince William. A real honor for the little girl.

The royal family wore many jewels in honor of Elizabeth II

If Princess Charlotte paid tribute to the Queen’s passion for riding, Lady Louise wanted to do the same. Indeed, the eldest daughter of Prince Edward appeared with a pendant on which appeared a horse during the vigil of the grandchildren of the sovereign. A passion that the queen’s favorite granddaughter shared with her. For her part, her mother, Countess Sophie of Wessex wore a black straw riding hat on the day of the funeral.

Finally, the other members of the royal family had also made a point of paying homage to the monarch by wearing royal jewels. Kate Middleton had opted for Bahrain pearl earrings and a four-row pearl choker with central diamond clasp from the Queen’s personal collection. Meghan Markle appeared with a gift from the Queen to her in 2018. These were pearl and diamond earrings. Just like Princess Charlotte, Queen Consort Camilla wore a piece of jewelery that has been passed down from generation to generation since it was Queen Victoria’s Hesse Diamond Jubilee brooch. Particularly symbolic jewelry for this special day. 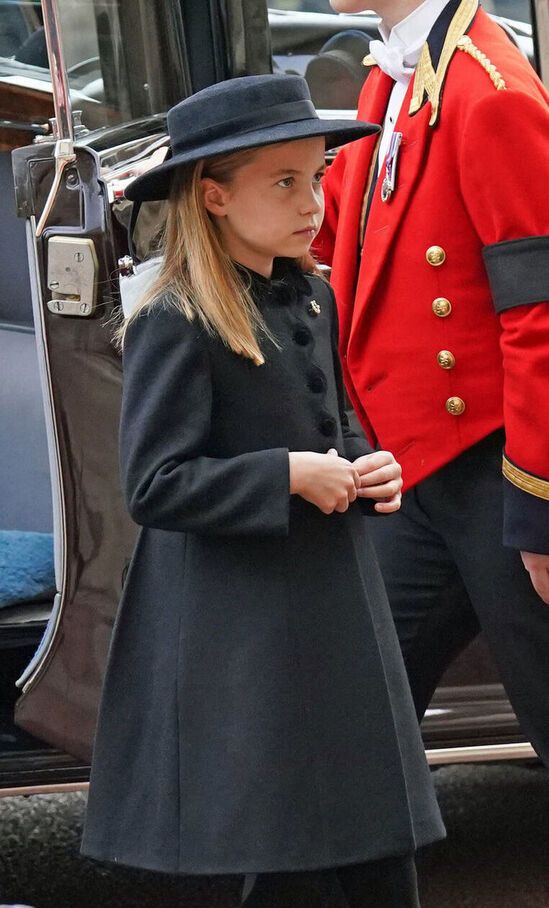