Prince George cheeky? Her cheeky remark to a schoolmate in the playground

In her new book The New Royals, journalist Katie Nicholl explores the personality of Prince George.
She tells in particular an anecdote in which prince George would have used the title of his father to fold down the cackle of his classmates.
Prince George is second in line to the British throne, behind his father, Prince William.

Serious air, irreproachable behavior and perfect haircut, Prince George has everything of the perfect future monarch. However, the first son of Prince William and Kate Middleton also hides a little mischievous side. In her new book The New Royals, slated for publication on October 4, journalist Katie Nicholl explores the real personality of the little prince. She notably delivers an amusing anecdote, explaining that the heir to the crown of England would sometimes use his title, and more precisely that of his father, to gain respect at school.

“George understands that one day he will be king and when he was little, during an argument with school friends, he already closed the door of some with the line: ‘My father will be king one day so you Better watch out!'” wrote Katie Nicholl. According to her, the grandson of King Charles III understands very well the importance of the monarchy. Nevertheless, his parents, Prince William and Kate Middleton, would make sure to keep him as far away as possible from the responsibilities implied by his title. A way to give him a childhood as normal as possible. “They’re raising their child, especially George, telling him who he is and what he’s going to inherit, but they’re keen not to smother them with a sense of duty.”

According to Katie Nicholl, the spouses of Wales would model their methods of education on those of Prince Edward and Sophie of Wessex. Although active members of the British royal family, the youngest son of Elizabeth II and his wife managed to keep their children, Louise and James Mountbatten-Windsor, away from the cameras and the pressure generated by their belonging to the monarchy. Kate Middleton, in particular, would be very admiring of prince Edward and his wife.

How did Prince George find out he was going to be king?

Nevertheless, Prince George will one day have far greater responsibilities than his Aunt Sophie and Uncle James. Thus, as the royal writer Robert Lacey points out in his book Battle of Brothers, Prince William and Kate Middleton had no choice but to explain to him very young that he belonged to an institution much larger than him. “William hasn’t revealed to the world when and how he told his son the news,” Lacey said. birthday, in the summer of 2020, his parents gave him details of his future life and his duty of service. William’s goal as a father, he explained, was to give his son ‘ a normal childhood’, which also allowed the monarchy to remain relevant in modern times.”

Since September 7, 2022, Prince George has been in school, with his sister Charlotte and his little brother Louis, at the private Lambrook preparatory school. But if he always grows away from the cameras, he begins to take on certain responsibilities. On June 4, 2022, as the United Kingdom celebrated Queen Elizabeth II’s Platinum Jubilee, the young prince and his sister, Princess Charlotte, notably accompanied their parents on a visit to Wales. Both had attended a concert organized near Cardiff Castle, built for William the Conqueror in the 11th century, and had greeted the crowd present. 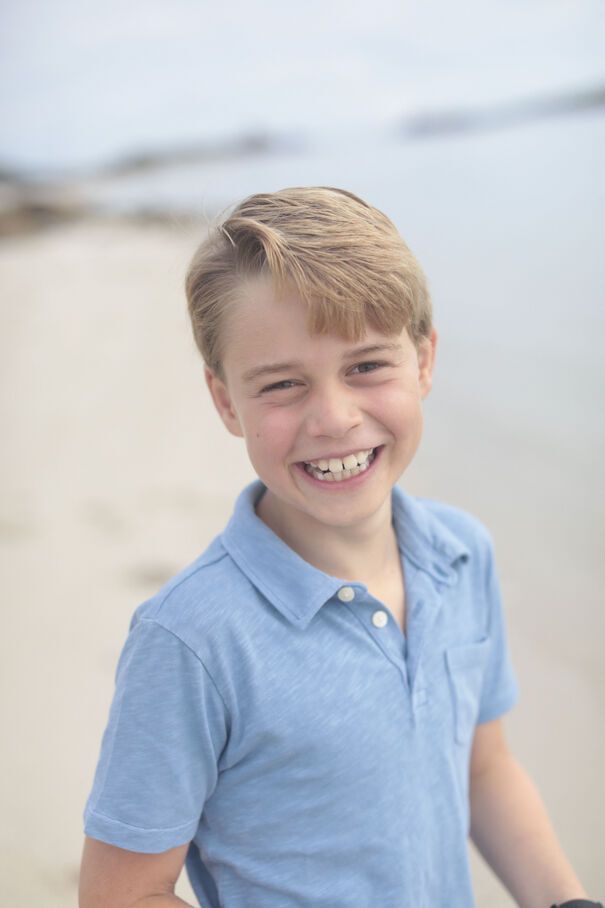 Prince George © TRH The Duke and Duchess of Cambridge via Bestimage