Queen Letizia of Spain appeared sublime in a coral cape dress for the evening offered by German President Frank-Walter Steinmeier and First Lady Elke Büdenbender at Bellevue Palace on October 17, 2022. In this tailor-made outfit and wearing vertiginous heels, the whole world had eyes only for the Iberian sovereign.

Letizia from Spain in Stella McCartney and Jimmy Choo

The dress worn by the Spanish sovereign was not unknown to fans of the Spanish crown, since as the magazine “Histoires Royales” pointed out, Letizia of Spain had ordered this custom-made dress from designer Stella Mc Cartney, to attend the 50th anniversary gala of King Willem-Alexander of the Netherlands in 2017. To dress up her outfit, the queen had chosen a pair of gold leather pumps with the Jimmy Choo logo, whose heel is a height vertiginous 12 centimeters. She also wore a diamond and ruby ​​adornment, earrings and wrist bracelet. According to our colleagues, “the queen regularly wears this pair during important engagements. She wore them for the first time in 2017.” Very beautifully, Queen Letizia had her hair up in a bun and coordinated her makeup to her outfit.

King Felipe VI meanwhile was dressed in a black tuxedo topped with a bow tie, as was his host, German President Frank-Walter Steinmeier and neither wore a badge. Next to her, first lady Elke Büdenbender also looked very elegant in a long black dress, although the Queen of Spain captured all eyes on Monday evening, despite not wearing a tiara. Indeed, our colleagues recalled that usually, “heads of state wear the insignia and decorations of the orders and if a queen or a princess is present, she can wear a diadem” adding that “when is about a meeting between a monarchy and a republic, it may be that out of modesty, the queen decides not to wear a tiara.”

Modern looks in trendy colors for that official trip

As soon as she arrived in Germany, Queen Letizia of Spain electrified the crowds with her looks in trendy colours, such as this fuchsia trouser set enhanced with a thin black belt and matching ballet flats, a striped navy blue trouser suit and derbies or another electric blue dress topped with embroidered flowers and jewels on the shoulders and blue pumps. A resolutely modern style while remaining chic and elegant, which is the trademark of the sovereign.

Indeed, Letizia of Spain never hesitates to wear outfits already used for official occasions, or to find pieces accessible to all as during this summer with a pair of espadrilles adopted by her daughters, the king’s mother and herself. Another way to show that fashion is above all a matter of taste, not of purse. 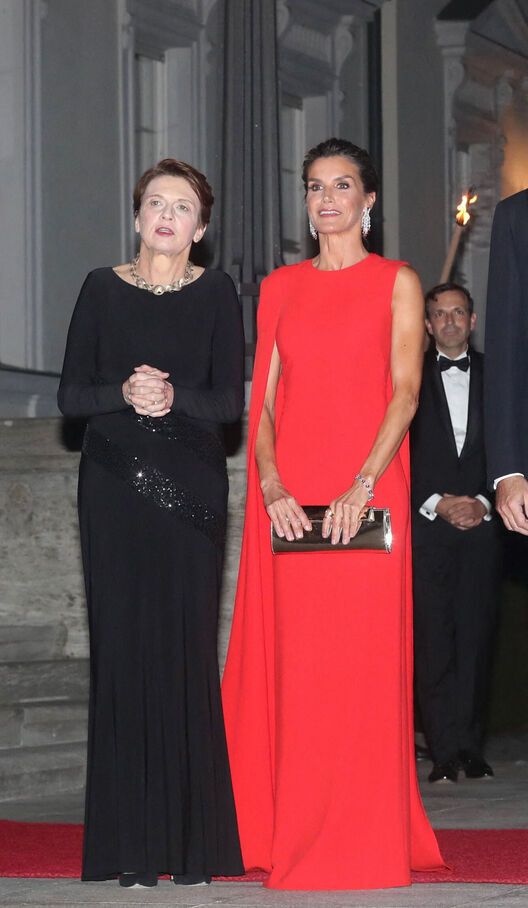