Leigh Steinberg: who is the sports agent who inspired the movie Jerry Maguire?

Some lines of this film, directed by Cameron Crowe, have remained cult in popular culture: Jerry Maguire, who portrayed the rising star of sports agents in the United States, marked an entire generation. But as so often, behind the fiction hides a real character. Leigh Steinberg is the one who inspired the director, who did not hesitate to follow him everywhere for more than a year to immerse himself.

To give strength and credit to his character, Cameron Crowe followed Leigh Steinberg for 18 months in all the events of the NFL, the national football league, in order to document himself and observe his work, his character traits. This took place in the early 90s while the film was only released in 1996. In the cast, Tom Cruise, Renée Zellweger and Cuba Gooding Jr. who had won an Oscar for best supporting role thanks to to this film, where he played an NFL player, wide receiver Rod Tidwell. “Most of the lines came from the creative mind of Cameron Crowe,” explained Leigh Steinberg in an interview with Sky Sports. He followed me everywhere for a year and a half, he went everywhere I went. He went to the NFL Draft, back in the pro scouting days, he went a lot of places with me and I told him a lot of stories. What exactly came out of it was between Cameron and me. “

If many traits of the life of the sports agent, now 73 years old, are found in Cameron Crowe’s film, it remains a romantic comedy, and certain aspects are born from the mind of the director. Indeed, in the film, the character played by Tom Cruise is fired from Sports Management International after reassessing his career goals, after which he develops his own agency and begins a romantic relationship with employee Dorothy Boyd. But in reality, Leigh Steinberg has always been self-employed as he explained in an interview with Parade in 2014 “I started my practice in my parents’ house in West Los Angeles… I was my own secretary, answered the phone myself, did my own typing and Xeroxing for the first six years, sat on a lounge chair in the back yard by the pool and made calls.”

Marital problems and the fight against alcoholism

If in the film, Jerry Maguire falls in love with Dorothy after creating his agency, in the real story, Leigh Steinberg marries his wife Linda in 1985, with already four clients in the Top 12 of the NFL draft of that year. However, the fact that his marital problems are at the center of his existence and that he had to struggle with alcoholism is not fictitious. After the release of the film, the players’ agent began to struggle in early 2000 against this grip, resulting from his problems in his personal and professional life. In an interview for Variety in 2021, Leigh Steinberg explained that the personal aspect of her work, very well demonstrated in Jerry Maguire – helped her to stay sober “I just thought: ‘What the hell am I let it happen?… I don’t have cancer. I live in a country with the highest standard of living. I have three wonderful children. What excuses do I have to sit and wallow in alcoholism?

Still active in 2020, Leigh Steinberg was participating in her 46th NFL “draft”, and had clarified to Sky News what was the very essence of her job with players. “I think they (his clients) need to understand that they have a unique ability to trigger imitative behavior, especially in young people and that together we can make a difference in the world.” 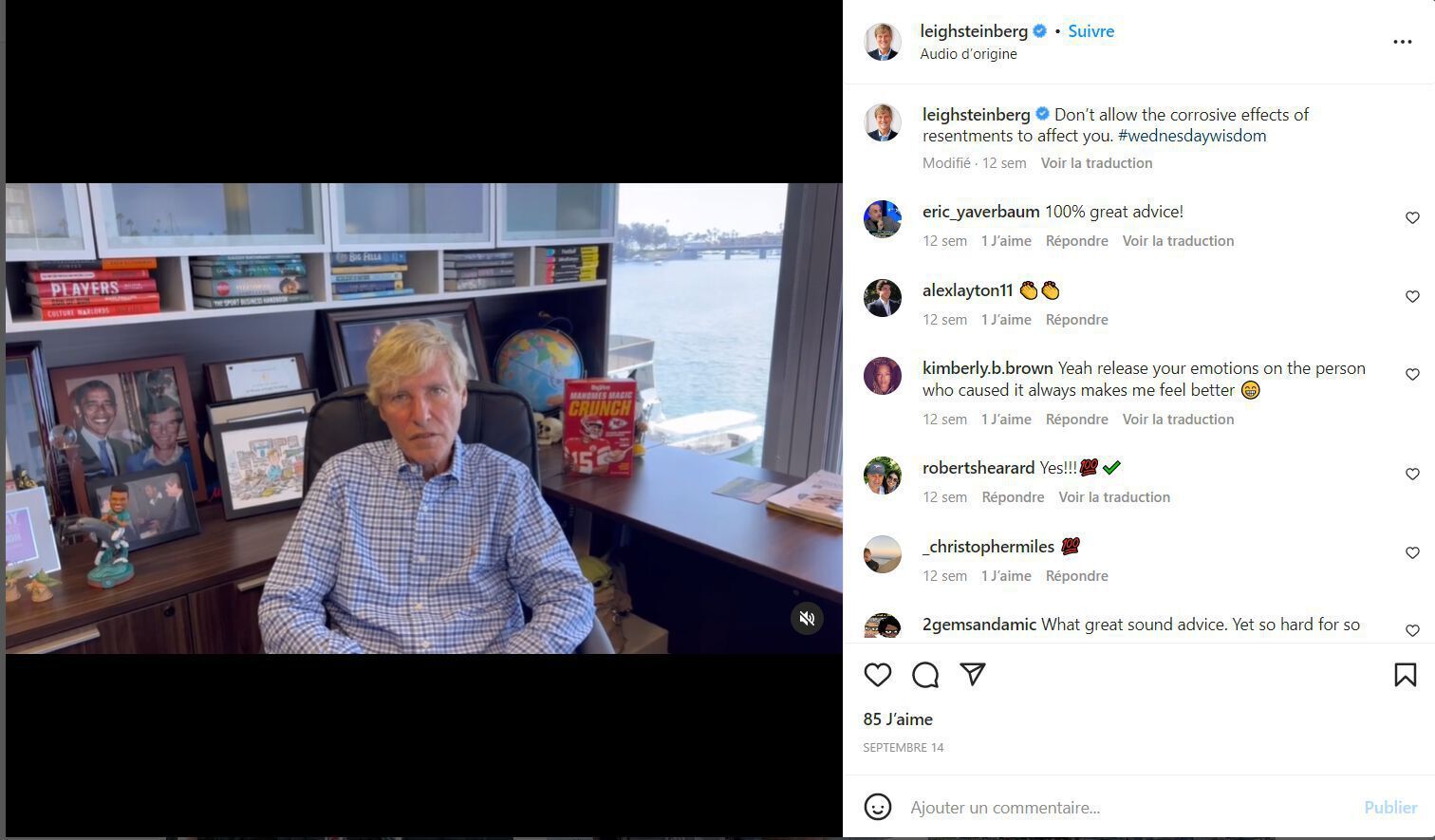