On the TikTok social network, a new phenomenon seems to be emerging, that of young women sharing their seemingly stress-free daily lives. Sports lessons with a private coach, beauty diets, institute visits for various treatments… are at the center of their days.

But to finance these activities, these young women do not pursue responsible careers. They simply use their boyfriends’ credit card, establishing themselves as “stay-at-home girlfriends.”

A girlfriend at home

Their code name? “Stay-at-Home Girlfriend”. The description of their “work”? Take care of their interior, their companions and their own appearance. On social networks, the publications of these young women attract thousands of views and do not fail to spark debate. While some people express frank jealousy of their easy and simple way of life, others denounce its retrograde and patriarchal aspect.

If the idea that a woman can be at home, especially by becoming a mother, is not new, the “shock” lies mainly in the fact that they are neither married to their spouses, nor mother. And they don’t plan to be. “On the surface, it looks like happiness,” relationship expert Anna Williamson told the Mirror newspaper. “But it’s a potential breeding ground for power struggles,” she added, adding, “There’s nothing wrong with only one partner working, but there has to be clarity, respect and independence at all times for both”.

Thus, Anna Williamson advised a “stay-at-home girlfriend” to carve out a distinct role for herself and her partner, in addition to their “boyfriend bank” aspect, so that each felt equally valued, also avoiding signs of codependency or financial abuse. “Without access to money, it can be much more difficult for these women to leave the relationship,” she confirmed.

The choice of the heart

Summer Hawkins is a perfect example of this new “trend”. At 28, the young woman chose to quit her job and then move hundreds of miles from her previous home to join Biggs Chris, 27, a real estate tycoon, who appeared in the sixth season of TV. Love Island reality. And the least we can say is that his daily life is quite… particular.

“Every morning, without fail, I get up before my boyfriend and I turn on the shower so that it’s nice and warm when he comes in,” she explained. “Then I make him a hot chocolate and he tells me what he wants for breakfast. Whatever he wants, he gets, whether it’s chicken and rice or an egg sandwich.” After saying goodbye to him as he leaves for work, Summer begins her cleaning routine, moving from the living room to the kitchen, from the bedrooms to the bathroom. But this daily cleaning seems hellish to him.

If his companion comes back for lunch, he asks him for a pizza. “I then spend the afternoon running errands, walking our dog, Prince, shopping, going to the gym or getting treatment,” she revealed. “I have my eyelashes redone every two weeks, my nails every three weeks and a few tanning sessions,” she noted. When her boyfriend comes home, the couple takes time together. Dinner, a movie or just relaxing on the sofa with snacks. “Biggs shows me how much he appreciates me by occasionally washing his own plate after breakfast,” Summer commented. But those aren’t his only romantic touches.

“He also brings me flowers, chocolates and stuffed animals and says, ‘Thank you for making the house a home.’ On special occasions, he will spoil me with designer bags and shoes,” she said. Alongside Biggs, Summer lives “a dream life”, paying nothing, and receiving money when she expresses the need for it. If the couple is planning a date, Biggs transfers some money to her to buy herself a new outfit. “I wait to see how much he gives me and then I stick to that budget,” she explained.

Leave the “manly stuff” to the man

What Summers dreads is appearing to use her boyfriend. “I’m counting on him but it doesn’t bother me. He takes care of everything I call the manly stuff including the mortgage, the bills and the gas and I take care of him. “He’s like my son sometimes” she liked to note. Yet Summers’ life wasn’t always like this. She had a career as a teacher in a London primary school. But this life stresses her out, she earns little money and struggles to pay her rent.

An offer that cannot be declined

When she meets Biggs in 2021 on social networks, the two young people meet at a nightclub. Arrived after her, he admits to having asked a friend to watch her in order to find out if she was “worth it” for him to come and introduce himself… “We spent the whole night together then the whole weekend and about five months afterwards he asked me to move to Glasgow,” she recalled. Biggs then offers to take care of her. “I think every woman would be thrilled with this offer,” Summers said.

Thinking about the future

Between the two partners, Summers affirms, there are no firm expectations. “If one day I haven’t done the laundry, he won’t talk about it, and he never made much of the fact that he pays for everything,” she said. Seeing their relationship as a team relationship, Summers particularly appreciates being freed from all stress in her daily life, focusing only on her partner. “I wouldn’t complain to Biggs if he told me to get a job but that’s not what I want. I could go back to teaching but I don’t want to,” she argued. This particular way of life has not failed to arouse comments from those close to him, especially from his mother who has always worked. “You’re like a 50s housewife,” she told him. Now delighted for the young woman who finds meaning in this daily life, Summers, she now focuses on the future, marriage and babies. “If we had a girl, I wouldn’t mind her being a stay-at-home girlfriend as long as she has something in case they break up,” she concluded. 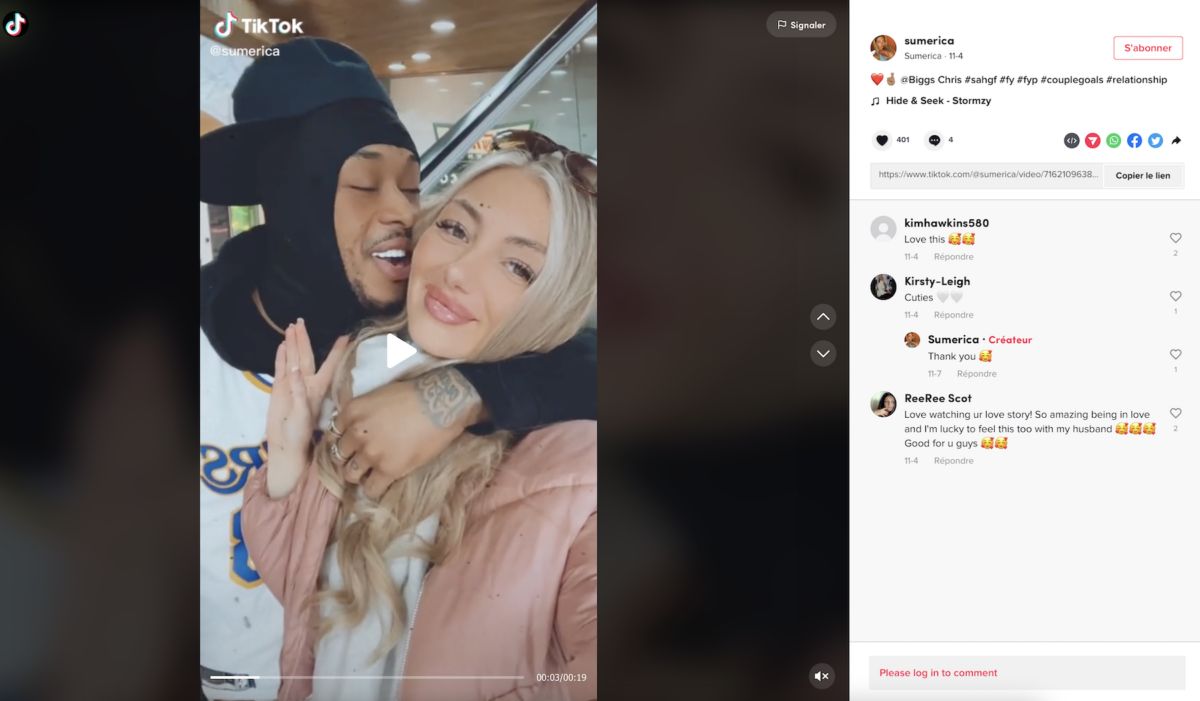