Andie MacDowell: This Sad Reason She Chose To Own Her Gray Hair

On October 2, Andie MacDowell paraded on the L’Oréal Paris catwalk during Fashion Week. Once again, the American star did not go unnoticed with her broad smile and her graying hair. The actress assumes her white hair and is still an exception in the world of cinema. A choice she explained in an interview she gave to Elle magazine. “I decided not to be ashamed of it,” she says. And to add: “Men assume them well, them – well, not all of them! -, so why not me? Men are beautiful at 60, why not me? Why won’t I have their strength too? seduction? My older sister has had white hair for a long time and it made me jealous. I think it’s so beautiful…”

It was at the time of confinement that Andie Macdowell explains that he had the click. “My daughters encouraged me. And I also thought of my parents, of my father, who was so sexy with his salt-and-pepper hair”, details the actress of Four Weddings and a Funeral. And to continue: “Unfortunately, I lost my mother when I was 23, I did not see her grow old. It is one of the great regrets of my life. would have looked like…” Elements that pushed her not to dye her curls and to assume her graying hair. “I am a woman of character, I refuse to be considered a diminished woman, weakened because of my age. I do what I want. If I want to wear clothes with large yellow stripes, it’s my problem !”

His age, too, Andie MacDowell assumes it fully. While this mother of three children has just finished filming Red Right Hand alongside Orlando Bloom, she is delighted to have been able to interpret, for the first time in her career, the role of a villain. An opportunity that she thinks she owes at her age. “As you get older, you can play interesting roles,” says the actress. The bipolar artist she plays in the Maid series would also have helped change things, she believes. “Until then, I was only seen in romantic roles, a repertoire that I adore by the way. Breaking this image took time. Maid really served as a springboard for me.”

Andie MacDowell: “We should celebrate all ages!”

It must be said that Andie MacDowell has never been afraid of aging. “The worst thing about old age is that people perceive it in a negative way. It’s stupid, I think we should celebrate all ages!” She said in an interview with a German magazine. in 2013. The same goes for the diktat of diets: “People freak out if they have a little belly or shapes. We can’t just have skin over bones. Women are women. It’s is what happens when you become a woman, you have hips and buttocks. You have curves. It’s like Venus, that’s what you look like… But it’s not celebrated enough”, was she apologized to British magazine The Independent. 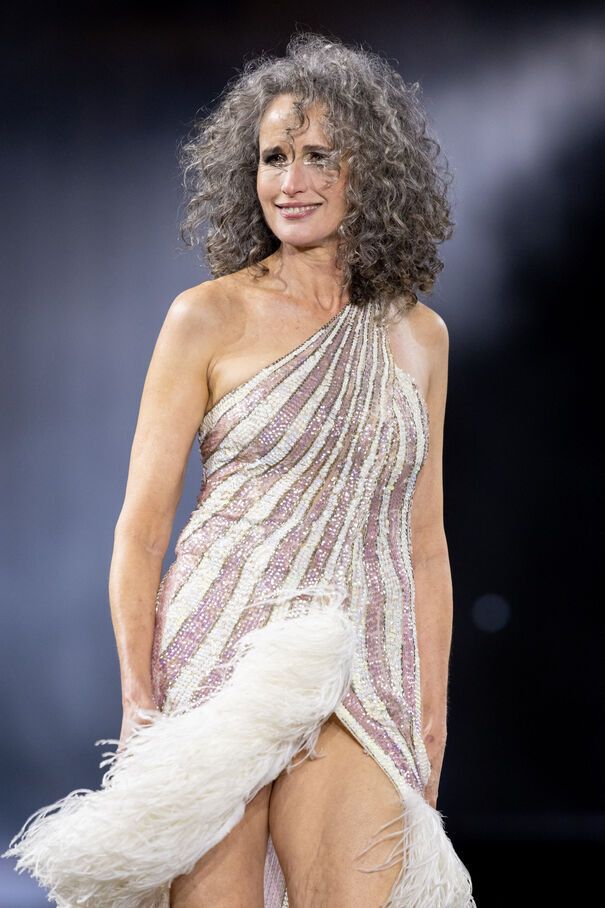 Andie MacDowell: this sad reason why she chose to assume her white hair © OLIVIER BORDE